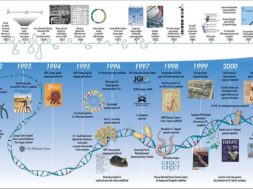 Today in 2000, U.S. President Bill Clinton and British Prime Minister Tony Blair jointly announced that the Human Genome Project had completed a “rough draft” sequence. The Human Genome Project was started in 1990 with the purpose of mapping out the complete human genome, with the hope of eventually being able to identify the specific genes that cause genetic disorders, cancer, and other diseases. Originally funded by the United States; countries such as France, China, and the United Kingdom (among others), as well as numerous other private and public entities, eventually joined over the years. It is still to this day the largest collaborative biological project in the world. The HGP was completed in April 2003, two years earlier than projected.